The historical town name 'Chataprun Pisonica' was officially mentioned on 9th February 931. At that time, Kaprun was a mountain village; most people were cattle farmers. Clearly, nobody could imagine Kaprun becoming a holiday region.

At the turn of this century, Kaprun became famous for its professional mountain-guides.

Since 1965, the Glacier Cable-car company Kaprun transports thousands of skiers, sun-worshippers, mountaineers, and hikers to the hights of the Kitzsteinhorn glacier.

30 years ago, the construction of cable-cars and ski-lifts at 3.029 metres altitude was a technical revolution.

Kaprun is one of the first-class addresses for tourists in Europe. In the skiing area on the glacier of Kitzsteinhorn, at a height of 3,203 m (10,508 ft), skiers, carvers, and snowboarders find the very best conditions for everything that is fun in winter. Since 1966 Zell am See and Kaprun have merged to form the ‘Europa-Sportregion’, offering their guests 130 km (81 miles) of finest pistes for winter sports. You are not in the mood for skiing or snowboarding? In that case you are sure to find an alternative among the 40 different kinds of sports in the programme here.

In the 1920s and 1930s, Kaprun developped into a 4-season holiday resort; it now has over 700.000 overnight stays per year. Apart from tourism, Kaprun is well known for its crafts, trade and agriculture. 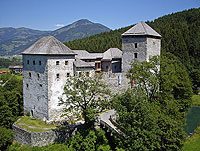 The building of the castle in Kaprun is assumed to have taken place around the 12th century, because the east tower features romanic criteria!

In 1280, the “tower to Chaprunne” is referred to documentary as a compensation for the assaults undertaken by the Velbers. Initially, the castle was probably possessed by the Earl of Falkenstein or Peilstein. 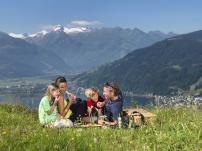